The 8th Day of Christmas

On the 8th day of Christmas, and the maids said, up yours. You want milk? Go to Becker’s (these maids were from the 70s) and get it yourself. 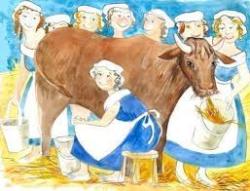 Yep. It’s the jolly old waste of skin herself, daring what no other councillor from Etobicoke dared to do in 2011. Defy the mayor. Not only does she vote with him far, far less than the other 5 councillors from the former west side municipality, she stands up and actually speaks out against him.

What do you think about them apples, boys?

Now, it’s not always pretty and can be hair-pullingly frustrating at times, watching her make her way across the metaphorical Rubicon. Witness her tortured deliberations over contracting out waste collection west of Yonge Street. She didn’t trust the numbers they were being given as savings. There were other details council needed to know before coming to an informed decision on the issue (she was right) that she felt weren’t being discussed. It just didn’t feel right.

Oh, for the love of the sweet baby jesus whose birth gave us this festive season, then vote no, councillor! You live in and represent Etobicoke which has contracted garbage since before amalgamation. If anyone should know the ins-and-outs about the issue, it’s you. Be a leader on this one.

Alas, she reluctantly went along with the herd majority of council to vote in favour of contracting out the service out. ‘Because it was going to happen anyway’ went her line of reasoning, apparently missing the irony that, no, no in fact, it wouldn’t have, if she had been able to convince a few more of her colleagues that they should maybe put the brakes on this until they could gather all the necessary information. At council, Councillor Lindsay Luby, you win some and you lose some but you tend to lose more if you vote against the things you would really like to vote in favour of.

But there is hope. Some independence of thought and spirit has been spotted from Councillor Lindsay Luby. She just needs a little more en(courage)ment of her convictions.