The 11th Day of Christmas

On the 11th day of Christmas, the pipers piped in… 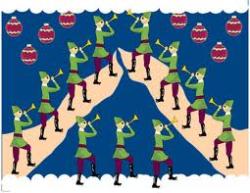 Probably the most misspelled councillor at City Hall, De Baeremaeker reminds us of no one more than the Willy Wonka of the local political scene. Childlike and wide-eyed in his enthusiasm, he is arguably the most positively passionate at council. Every time he gets up to speak, it’s as if there was no issue more important than what’s before him at that moment. There was even chocolate fondue provided by his colleagues during the council meeting this month in celebration of his 50th birthday. So you see? Willy Wonka, chocolate…

And the toys, the toys and props Councillor De Baeremaeker (there’s just too many damn ‘e’s in that name!) brings into chambers to make a point. There was the toilet during the debate to repeal the city rebate for low flow flushers. And then there was the floating shark during the shark fin ban debate. A little levity injected into what can be a grind at council meetings sometimes.

But don’t write off Councillor De Baeremaeker as a naïf or pushover. He can drop the gloves and go bare knuckle when the need arises. During the council heat generated over the removal of the Jarvis bike lanes, he told Mayor Ford to man up and ride a mile in his biking shoes before suggesting any cyclists’ death on Jarvis would be on the mayor’s head. He was forced to apologize but the point was made. (I also have a recollection that I can’t corroborate that he dropped the f-bomb around that time too.) Councillor Glenn De Baeremaeker may come across as a softie but he can be tough as nails when the chips are down. 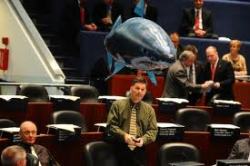 Forget Will Wonka. From here on in, we’re going to call him the Velvet Hammer.