I don’t think it too off-base to say that the quality of candidates running for mayor of Toronto this time around is somewhat lacking. At least those who’ve been hoisted into the forefront of the campaign. It could just be one of those anomalies of timing and circumstance. Or perhaps it’s more systemic.

Who, in their right mind, would want the job? To be truly effective, a regular 80 hour work week isn’t out of the question. So the financial remuneration is modest by those standards. It is a thankless role that, more often than not, creates as many enemies as friends. You know that after a while, people aren’t calling you Your Worship with anything but contempt.

So maybe we should be surprised that a truly qualified and exciting candidate ever throws their hat into the ring.

Why, that leap? Well, it was the media that created them, that lent them credibility, that dubbed them ‘frontrunners’ based almost exclusively on name recognition and name recognition only, whether that of the candidates or the connections they brought to the table with them. These are the media ‘darlings’ and so the media should be held accountable when their brood goes on a murderous spree, killing civic spirit.

None, more so, than the Toronto Star’s Royson James. Few journalists covering the municipal beat outside of those writing for the Toronto Sun did more to diminish the Miller administration and flog the tale of a profligate city council than Royson James. He led the sanctimonious charge to dislodge Adam Giambrone from the race after the councillor’s personal indiscretions surfaced. Not out of any prurient revulsion, you understand, but because the “Boy Wonder” didn’t come clean about the revelations in a timely fashion, revealing a lying, prevaricating and untrustworthy nature that was unfit for higher public office. 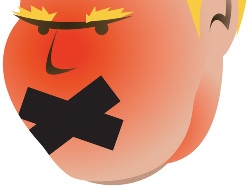 And yet.. and yet, there’s Mr. James taking to task Rob Ford’s detractors for their continued ‘demonizing’ of him and his supporters. No mention in the article of Ford’s lying, prevaricating and untrustworthiness, of which there has been plenty. Never mind in regards to his personal life but as recently as last night’s television debate (at which Royson James served as a panelist) where Ford continued to lob out nose stretchers like the one about the Jarvis Street bike lane costing the city six million dollars when, in fact, it lost less than 1/100th of that figure.

Instead of calling out Rob Ford for that kind of lying and prevaricating, Mr. James tries to make sense of the candidate’s proposed budget numbers. “Guaranteed, Ford won’t net all the savings he boasts,” James writes (in other words, he’s lying). But we’ll call it a “partial success”.

Double standard much? A lying politician who shares your views is a “partial success” while another not in synch with your ideology has lost the moral authority to even be in the race.

Just how hard is it to “run a smart, intelligent, disciplined and focused mayoral campaign,” as James claims Rob Ford has done, when opinion makers like Royson James, writing in the pages of what is supposedly a Liberal-leaning paper like the Toronto Star, give Ford a free pass, with a wink and nod at clearly defective policies? And then he’s got the balls to lay the blame for Ford’s success at the feet of all those who he sees as merely ‘demonizing’ Ford and his supporters. Where exactly is Royson James getting his news and information currently?

The anti-Ford camp that I encounter isn’t particularly involved in ‘demonizing’ anything other than the clumsy, unworkable platform Rob Ford has put forth and the blind anti-government stance he and his supporters are trying to foist on us.

Of course, there are outliers who hurl personal insults. But, in my experience, that is hardly the driving force behind the Anything But Ford movement.

If anything, I might argue the exact opposite. The actual ‘demonizing’ going on during this campaign, that defines the very core of a particular candidacy, is that in the Rob Ford camp and its rabid followers. Their ‘demonizing’ of the downtown core and its elite inhabitants as the source of all the city’s problems. The ‘demonizing’ of unions and bureaucrats or all that ‘corruption’ that goes on behind closed doors at City Hall. Much of it factually challenged and, now that I think about it, much of it based on the ‘demonizing’ the current administration’s been subject to and that has been the bread and butter of Royson James’ screeds over the past 7 years.

article was to belittle critics of Rob Ford with the suggestion that they’ve got nothing more than the powers of ‘demonization’ at their disposal to try and discredit the Ford candidacy. Thereby, Mr. James sanctions the idea of Ford as a credible consideration for the job of Toronto’s mayor without having to actually come out and say so directly. A cowardly approach to informing public discourse, and proof positive of how our mainstream media is failing us so miserably.