It’s Friday, and if you can tear yourself away from watching the World Cup for a moment, cast your eyes this way for our weekly Meet A Mayoral Candidate.

Now, we don’t want anybody to finish this post and walk away thinking it’s an out-and-out endorsement of Mr. SYeD. It’s too early for that. Questions still remain that need to be answered. But we will confess to having somewhat of a crush on the candidate, politically speaking of course. So consider what follows to be an unapologetic endorsement of HiMY SYeD being taken very, very seriously as a candidate for mayor of Toronto in 2010. 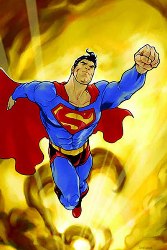 He popped up on stage for the one minute presentation given to all registered candidates for mayor who had not made it into the main debate portion of the evening. And as show business people say, he killed, delivering a rhythmic speech that ended with a very funny call to arms. This Election is not about Left or Right. It is about who is being Left behind, and who’s Right behind them. We’ve sent enough Cowboys to City Hall. Now, It’s Time for an Indian. The visual joke being, Mr. SYeD is of southeast Asian extraction.

Apparently, this was not the first time he made an impression at a political venue. Back in 2006 at Dave Meslin’s City Idol competition, SYeD created a stir as reported in NOW magazine. “The citystate has been replaced by the neighbourhood civilization,” says candidate HiMY SYeD (his spelling, not mine). “You don’t need a councillor, you need representation for your neighbourhood. You need a superhero for your neighbourhood!” Stripping down to a Superman costume, he jumps off the stage, through the crowd and out the door.

So just a gifted performer with a knack for publicity stunts? No, that’s Rob Ford’s schtick minus the ‘gifted’. Sifting through Mr. SYeD’s work and online presence (and he has a very large online presence; so much so as to be slightly daunting to techno-dolts like us), we begin to discover a highly thoughtful, active and involved citizen. His resumé is wildly varied but with a unified core: politics.

Islamic banking and finance, civil rights activist, photojournalist, Torontopreneur – a founder of Torontopedia. Mr. SYeD is up to his eyes in the life and wellbeing of this city.

On the campaign trail, he Tweeted responses to questions being asked of the 6 media picks for mayor at this week’s CP24 televised debate. (Freezing Wages/Salaries “Across The Board” is irresponsible w/o Forensic Accounting & considering Unintended Consequences) He attends council meetings, appearing to know more about what’s going on at City Hall than those like the above mentioned Mr. Ford who’ve been elected to represent it. Just a couple days ago, SYeD revealed to the Tweetosphere that Councillor Paula Fletcher once again pressed the wrong button and voted in favour of a motion that she claimed to be against just as she did in spiking the University Avenue bike lane proposal. Oops! She did it again… 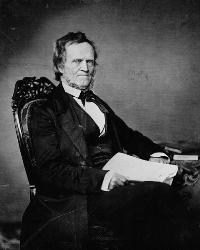 Sifting through the mountains of content that Mr. SYeD produces on a daily basis, we begin to decipher the coalescing of that whole ‘Vision’ thing candidates ought to bring to the table when asking us for our votes. While the front running candidates are competing to simply nibble around the edges of what this city needs in order to grow prosperously, equitably and sustainably (or choosing to ignore that necessity altogether), HiMY SYeD has made the leap from Ward 19 councillor candidate to mayoral to tackle the governance of Toronto head on. “It is time for our city to reset, reboot, restart, and take on the challenge of what I call “Remalgamation” and get on with finishing the work that was started in 1998 when six cities… merged into one.” 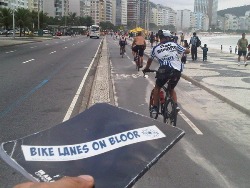 Taking his biking message to Rio.

One city. “As people, we are all born with human rights. These are universal and should not be up for negotiation. In deference to the jurisdictions in which we may live, we have some elastic level of Civil Rights. Civil Rights are by their very nature, a permanent negotiation within the society. By simply living within a city’s borders, are there certain inalienable municipal rights? Regardless of citizenship, residency, class, gender. What is the right to the city?”

It is in pursuit of the answer to that question where we see the emerging vision of candidate HiMY SYeD. For him, the rhetoric of this mayoral campaign has been all about the things and “stuff” of Toronto – infrastructure, bureaucracy, taxes – and precious little about its people. Thus, when trying to answer our lame question, If the present mayor would like his legacy to be that of the Transit Mayor, how would a Mayor SYeD like to see his legacy written, it seems best to just go back to the beginning of this post. HiMY SYeD, the Peoples’ Mayor!

Yes, more specifics will be required as the campaign proceeds. But candidate SYeD has earned the right to have those specifics aired to a citywide audience. He needs to be up on stage with Mssrs. Ford, Mammoliti, Pantalone, Rossi, Smitherman and Ms. Thomson each and every time they debate. Failure to make space for him will reveal a cravenness and fear of having a truly meaningful discussion about the future of Toronto on the part of our mainstream media and the leading candidates themselves. We, the people of Toronto, should not be denied that discourse.

This entry was posted on Friday, June 11th, 2010 at 1:01 pm and is filed under Better Ballots, City Council, CP24, Elections 2010, Municipal Politics, Press coverage, Race 4 Mayor. You can follow any responses to this entry through the RSS 2.0 feed. You can leave a response, or trackback from your own site.