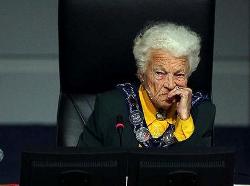 Crazy Hazel McCallion, McHellion I’ll call her, as I’m sure no one ever has before, she’s at it again, spouting off nonsensical blatherings. Won’t this woman ever retire? Talk about your career politicians.

At a pre-meeting of big city mayors before this weekend’s gathering at the Federation of Canadian Municipalities, Mississauga mayor McCallion pooh-poohed a call for a new, more equal partnership between all three levels of governments. According to last Thursday’s Toronto Sun, “…McCallion said a new partnership is not enough — it’s time to open the “can of worms” that is the constitution to give recognition to the important role of cities, enshrining powers and revenue sources needed to keep municipalities viable.” Has grandma finally lost her marbles? 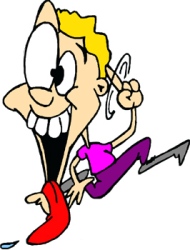 Surely she can’t mean opening up the always divisive constitutional process just for the sake of such a trifling matter like municipal powers?

“It really means a look at the constitution, there’s no question about it,” McCallion said.

Now I know there are some who would say that perhaps we should cede a little ground on this issue to someone of McCallion’s… errr… experience. I mean, the woman just might be old enough to actually know the intention of the makers’ of our constitution, going all the way back to the original British North American Act of 1867? Maybe old Hazel has some insider information.

But if there really is “no question” about looking at the constitution why hasn’t anyone else suggested it? 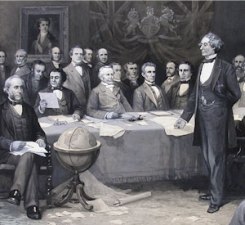 In order to give cities the powers they need to sustain and upgrade infrastructure and build stronger communities, wouldn’t our elected officials in Ottawa and Queen’s Park utilize every means at their disposal to make sure that happens, including looking at the constitution? Surely to god our Prime Minister and Premier, M.P.s and M.P.P.s aren’t so petty and rigid that they would blindly adhere to some document written back during the middle years of Queen Victoria’s reign simply in order to keep power (and revenue) in their grubby little hands while municipalities heave and convulse under the weight of increasing fiscal and human responsibility. That can’t be what McCallion’s suggesting.

And if there really was “no question” about looking at the constitution wouldn’t this be a major topic of debate during our current municipal election campaign? With all the tough talking hombres we’ve got running for mayor in 2010, you’d think at least one of them would be pushing the idea of increasing Toronto’s share of power and revenue through constitutional reform instead of nattering ineffectually at each other and casting highly dubious aspersions upon the present council and the mayor.

If Hazel McCallion — who has been mayor of the 6th largest city in Canada for longer than most of Toronto’s mayoral candidates have been old enough to vote — has decided that the only way for cities in this country to continue to grow sustainably and prosper is for a constitutional rejigging, and none of our candidates seem to agree on that or even deign to bring the subject up on the campaign trail, well obviously, Hazel McCallion is talking through her hat on the issue.

Perhaps McCallion needs to take a little time out (nap maybe? Don’t old people need naps in order to keep themselves functioning properly?) and then read Carol Goar’s take on the matter in the Toronto Star. “…local taxpayers have lost their appetite for mayors and councillors who see Canada as a dynamic urban nation,” Goar informs us. “… the debate about building strong, sustainable city-regions has almost petered out,” she continues. You see, Hazel?

If the Toronto Star has decided that we should just shut up, sit back and let senior levels of government ignore the needs of the some 80% of Canadians who live in cities, that’s the end of the discussion. We don’t want to hear talk of provincial status for Toronto or the GTA. Or pie-in-the-sky, pipedream calls for constitutional reform in order to put power and actual decision making in the hands of, you know, citizens. 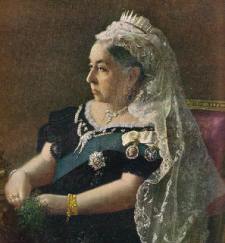 It’s off the table, old lady. Municipalities are the playthings and pawns of our higher ups, regardless of how negligent and detrimental the policies of senior levels of government may be to our lives. You’d think after more than 30 years of being mayor, you’dve cottoned on to that fact.