It’s Friday. Time for another installment of Meet A Mayoral Candidate!

This week, Don Andrews for Mayor.

For all the wrong reasons I think it might be funny if Don Andrews got to be mayor of Toronto just for a day. Can you imagine the whole change in dynamics around City Hall if there was a Mayor Andrews who, after getting a tough question from a reporter, simply said: I don’t talk to a Jew media stooge? At council meetings he’d refer to any councillor left of Rob Ford (that would be all them, I believe) as Marxist goons. And since the demographic make up of the city council remains stubbornly white and male, a Mayor Andrews would label any of his council detractors as ‘race traitors’.

It’d be like watching Archie Bunker crossed with Sgt. Rock. 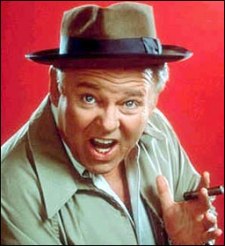 Now I know to someone like Don Andrews, we here at All Fired Up in the Big Smoke are a bunch of self-loathing Caucasians but we’ve never got our heads fully around the whole racial superiority thing. It doesn’t seem to hold up, biologically speaking. Pure bred dogs may be beautiful to look at but they tend not to live as long as their mongrel counterparts not to mention their bad hips and such. Without a diverse gene pool, the human race might be susceptible to one particularly virus or bug. Hitler’s dream of a master race, made dubious with Jesse Owens performance at the 1936 Olympics, had flamed out completely by 1945.

And as for the whole white thing, who qualifies as ‘white’ white? Certainly not the Jews. How about swarthy southern Italians or the Greeks? If Greeks qualify, why not Turks? Andrews himself is of central European stock, from the former Yugoslavia with an Anglicized name. More importantly, what about me and my mixed Euro background? Am I white enough?

Not that we’ve found any actual reference to white supremacy in the campaign literature we’ve read through so far. It’s just the indignation Mr. Andrews displays at the decreasing percentage of the once visible majority in Toronto and the fact that it means the city is deteriorating into “a pirate port” that hints at his thinking of racial hierarchies. By talking about ‘the white man’s pledge of common sense, good will and fair play’, there seems to be a suggestion that non-whites are unfamiliar with any of those positive attributes.

All that aside (admittedly, a big aside), what we find astoundingly compelling about Mr. Andrews is the raging contradictions that run through his beliefs and campaign platform.

Some of which he’s admittedly aware of. Like the fact that as an immigrant himself from ‘the hills of Sarajevo’ who ‘was bullied for my fat lips and East European complexion by a ginger-headed ruddy, pimple-faced love rival’ back in the 50s, he now finds it ‘ironic’ that he’s ‘appealing to self-protecting bigotry’. His paranoid frettings about a ‘globalist police state’ bring him and the National Party firmly onside with another Canadian bete noire, the Khadr family.

To truly get a sense of the kind of cognitive dissonance someone like Don Andrews must have to live with day in and day out, read the May 3rd account, Fearless Voters Wanted, of his encounter with two Chinese ladies in a cemetery.

Even the finest of fiction writers could not make that kind of shit up.

What ultimately caught our attention about Don Andrews, race warrior, was that he appears to also be somewhat of an eco-warrior. He is passionate in his dislike of graffiti. Another one of his Initial 5-Point Program is to plant trees throughout the city. Mr. Andrews also shares our dislike of traffic congestion although, so far, he hasn’t put forth any idea on how to solve that particular problem.

Short, of course, of putting an end to non-European immigration. Less people means less cars but we’re not even sure if Mr. Andrews has a problem with too many people in Toronto or just not enough white people. Perhaps there is a logic to this seeming dichotomy.

So to answer our own question that we’re poising to all the mayoral candidates, If the current mayor wants his legacy to be that of the Transit Mayor, what would a Mayor Andrews legacy be?, we’ll say the Mayor Andrews legacy would More White, More Green. A lighter shade of green.