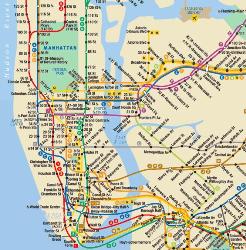 Very few fancy-schmancy, artistically rendered stops. Functional, turn of the last century, drab holes in the ground with newer vehicles running through a true maze of tunnels; occasionally idiosyncratic, rarely welcoming. It is a little confusing at first with your A-W, 1-8 trains, express or local runs, uptown, downtown, Rockaway bound mélange although not impossible to quickly learn how to navigate. Cleaner and freer of debris than the much less extensive moving far fewer people Toronto subway.

But on a late morning on any day of the week, you can get from the upper west side of Manhattan to the Williamsburg section of Brooklyn in a matter of minutes for the low, low price of $2.25. No fuss, little bother. Ba-da-bing, ba-da-boom. 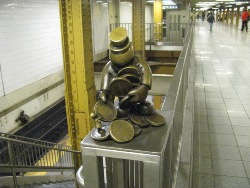 Beyond the shadow of a doubt, a subway is the best, most efficient way to move a mass of people throughout a densely populated area. About this there can be little argument. Except of course when it comes to cost. To build subways in this day and age is a pricey, pricey proposition. In most cases, prohibitively so. $300 million per stop is one estimate I have seen. So instead we talk up the benefits of LRT, environmentally friendly buses and the like. Poor second choices, runners up, consolation prize winners.

Here is another idea.

How be we take $1 billion, just over the cost of building 3 subway stops, and use the funds to develop a time machine? Hear me out, people, hear me out on this.

We could then travel back in time to a low cost era – the early part of the 20th-century or just after World War II – where we would construct a much grander, wider ranging subway than we did at the time, forewarned as we would be with the knowledge of how big Toronto would get and how important public transit would be to our future well-being.

If that’s unrealistic due to a mere billion dollars not getting us that far back in time, we could spend less and return to a more recent era. Say just 25, 30 years ago before we started electing short-sighted, narrow-minded, parochial politicians who lacked the intestinal fortitude to do what was right for the health of our major urban areas.

Aim for about 1980 or so when dim-witted, neo-liberalism became all the rage, ravaging good governance and sound future planning in its greedy gob.