You know, even without any delays it is a long subway ride up the Yonge Street line to North York Centre. I was aroused from my reading material somewhere between Lawrence and York Mills, wondering if I’d read through a stop. You go really fast for a long time which, if my understanding of the physics of motion is solid (and it probably isn’t), means that you are traveling great distances.

Why would you be doing that, you might rightly ask. Heading up to the first Better Ballots Town Hall meeting, I will inform you, held in committee room #3 of the North York Civic Centre, home of the former city hall of the former city of North York. Its empty early evening halls steeped in the history where colossi of the political scene like Mel Lastman once strutted and fretted. The air remains pungent of past power, reeking of… shoe polish. Or maybe it’s the cleaning agent that’s being applied to a floor off down one of the corridors. 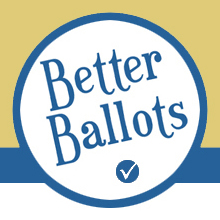 Better Ballots, if you don’t know and you should, is an organization committed to increasing voter turnout at the municipal level. The website can give you much better presentation of their mission but in a nutshell: less than 40% of eligible voters voted in the last municipal election in Toronto; 14 of the 44 councillors were elected with less than 50% of ballots cast; only 1 incumbent councillor was defeated while another won his ward with just 20% of the vote; the council make-up is wildly unreflective of the city’s diversity that it claims to represent. Better Ballots wants to change all that.

Local political impresario, Dave Meslin, is the Better Ballots project coordinator and has been toiling away in the margins of election reform for much of the past decade including 2006’s City Idol where 4 candidates were chosen to run for council seats in that year’s election. He chaired last night’s town hall in an amiable but focused manner, promoting inclusiveness with the 25 or so of us there while not allowing things to careen too far off topic. Like any good promoter of a cause, Meslin made sure to surround himself with other smart, articulate advocates.

There was Desmond Cole, one of the winners of the City Idol project, and now an organizer with iVote Toronto. Another Better Ballots representative, Rob Newman, talked about campaign finance reform. Julia Deads from the Toronto City Summit Alliance moderated the town hall portion of the meeting, gently but with the necessary firmness to keep the proceedings flowing. If I had any claim to being an actual journalist, there were a couple other members of the panel whose names I would’ve made note of but didn’t. One was from Fair Vote Canada, a group promoting more proportional representation at all levels of government. I want to say Jeff Peck but, maybe somebody out there who attended the meeting with much better powers of observation could correct me on that. [It was Mark Greenan not Jeff Peck from Fair Vote Canada who were referring to. Thank you to mayoral candidate Sonny Yeung for clearing that up for us. — ed.]

The intent of this town hall meeting (and the 3 others planned at various city locations throughout April) was twofold. The first was to present 14 proposals for discussion about possible reform. These included such things as extending the vote to permanent residents and lowering the voting age to 16, the pros and cons of municipal parties and term limits, several options on ballot structures and districting and the above mentioned campaign finance reforms.

Along with providing information, these town hall gatherings are also about promoting advocacy. Ideas are all well and good but they die on the vine without a movement to take them to a wider audience. The second aim of the meetings is to initiate a grassroots movement to begin pushing for the reform options that garner the most interest from those who attend the meetings and vote on the ballot provided.

Despite what you might think, grassroot movement making ain’t pretty. It’s not all Julia Roberts’ Erin Brockoviches and Meryl Streep’s Karen Silkwoods but rather a long, tough slog through outsider-ville. For every smart, dedicated activist and proponent, there are those who wear their exclusion from the mainstream loudly and proudly, sometimes hijacking the proceedings to grind an axe or to just simply have their voices heard. This manifested itself last night when a handful of mayoral and council candidates took the floor to speak their minds. More campaigning than listening, they mostly took up time and space rather than contributed to the discussion.

Still, the dialogue was far more informative and exciting than any of the claptrap and bullshit that has passed for debate and deliberation so far in campaign 2K10®©. These people truly want to change how things are done in Toronto and to explore the ideas that will ultimately translate into electing those who best represent the widest community views at City Hall. It was time well spent on the subway hearing them talk about it firsthand.