Being an outsider in all matters religious I must confess to a certain unease with the concept of Easter. It is a period of observance that, laying it all out on the table for you, kind of gives me the willies. The joy that springs from death, and not only death but a savage, grisly, barbarous death at that, unsettles me.

Yes, yes, I do understand that this is the serious meat and potatoes of Christian faith. Death and resurrection and one must die in order to live eternally and that Jesus was put up on the cross for our sins but couldn’t he He have taken the whole Socratic route and insisted on drinking a cup of poisoned hemlock instead? Too suicidal for you? How about just one to the back of the head then? Clean, simple and we’re all off for the rest of the weekend to wait for his miraculous, heaven-bound reappearance.

It’s the reveling in the gory details of the death – the Gibsonian Passion of the Christ – that seems so unnecessary, so full of life denouncing abnegation. Existence is nasty but we must bear it devotedly in order to live again gloriously in the presence of our Lord and Saviour. 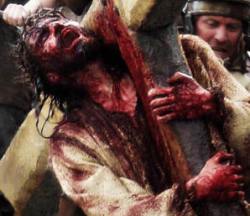 Just putting in time, probably miserably, until I can shrug off this mortal coil and kick back to enjoy eternity without a care in the world. Far too much stake in the future for my liking.

In addition to which, if the whole Easter holiday is so important to Christians, why did I get a phone call from a friend in the U.S. yesterday who expressed surprise that I wasn’t working? It’s Good Friday, dude. The whole place is closed up almost as tightly as it would be at Christmas. Apparently not so much Stateside. Aren’t they supposed to be the most religious country in the western world? If the whole Easter commemoration isn’t that important to them, are they practicing their religion incorrectly? Should someone explain it to them?

And another thing. If the death and resurrection of Jesus is so integral to Christian doctrine, what’s with all the Christian based anti-Semitism? If he He had to die in order that we all shall live again, shouldn’t we be thanking our Jewish friends for setting the Romans on Him?

Judas should be celebrated rather than reviled for betraying Jesus. If he’d done the honourable thing and not sold Jesus down the river for a few pieces of silver, history, as they say, might have been entirely different.

Still, I’m not going to turn down the prospect of a couple days off for the sake of a theological quibble. Especially not this weekend given that it seems we’ve skipped the whole spring thing and plunged right into summer. I slip into my sockless shoes, pull out the old straw fedora and head out for a mid-afternoon promenade along College Street.

Only to be stopped up by crowds of people that can only be described as nothing less than a throng. It’s as if taking a cue from the weather, the street festival season has just decided to start. Cars are parked everywhere. Huge packs of families meander, ice creams in hand.

It’s a holiday, sure, with exceptionally good weather but.. all of Toronto has descended onto College Street? The Eaton Centre must be closed.

Then the music kicks off, a dreary funeral dirge, and I suddenly come to my senses. The Good Friday Easter Procession making its way through the heart of Little Italy. You think I would’ve remembered, what with all the previous talk about this particular religious festival. So I step up onto a restaurant doorway to watch the passing of the parade.

Almost immediately, The Godfather or, more precisely, The Godfather Part II springs to mind. Robert DeNiro’s young Vito Corleone stalks the white suited local mobster, Don Fanucci, during a similar religious procession in New York and kills him in the darkened hallway of a tenement walkup.

Another Easter. Another execution. There seems to be no escaping it.

The procession participants are mainly older expect for those having to do anything at all overly physical. Like the Jesus who’s getting beaten up by Roman soldiers. Outside of that, the numbers skew heavily toward the elderly. I wonder if their children, down visiting from places like Woodbridge and now watching from the sidelines, will step up and fill the void when this generation dwindles. There’s that whole death and rebirth symbolism at work again. It’s hard to imagine. Rather than occupying a central spot in the lives of the younger folks, religion is merely observed, thought of only during the holiest of days and on monumental occasions like weddings and funerals.

There it is again. Funerals. Death. No escaping it, it seems when Easter comes around. A funny thing to design a life around if you ask me. 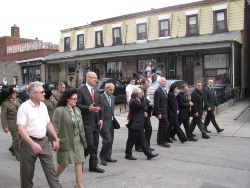 No wonder they came up with the whole bunny angle. Sure, sure. Life is full of pain and misery. Death awaits us all. But it’ll all be worth it when we go to heaven (if we go to heaven… otherwise… well, just get to heaven) and live forever in blissful contentment. Not sold? OK, so there’s this bunny and he brings you chocolate…