So, is anyone doing anything else with their leisure time these days aside from seeing and re-seeing Avatar? I ask because last Friday I thought I should go and check out what all the fuss was about only to discover that every one of the 3-D IMAX showings over the weekend were sold out. Sure, I could’ve taken Avatar in at a normal screening but my guess is that without the additional fancy pants, hi tech eye candy that the 3-D and IMAX provides, you’re going to realize PDQ just what a crappy movie it actually is. 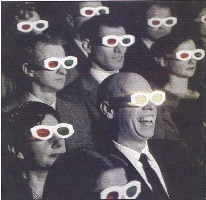 I bring this up because as I was thumbing through NOW, our weekly alternative newspaper, to find movie times, I came across reporter Enzo DiMatteo’s sorry assed excuse for a political column. It seems that in last week’s issue, DiMatteo mistakenly outed councilman (and possible mayoral candidate) Adam Giambrone who is so far in the closet that he’s actually straight. Giambrone then had to give a give an awkward, Seinfeldian denial, saying that he wasn’t gay, followed by the implied Not that there’s anything wrong with that, and that his partner, Sarah, was a full blooded female. Oh well, honest mistake, Enzo. I mean, look at Adam. Tall, slender and with those purrr-dy lips. How couldn’t he be gay?!

Remarkably, not only is DiMatteo still part of the NOW staff after such an embarrassing gaffe but he was permitted to write an eye-poppingly lame mea culpa filled with stroke inducing puns like: No use crying over spilt milk (can I say “homo”?) and doing penance over his faux pas by listening to Morrissey and The Smiths sing (guess what song, guess what, guess what!!) Big Mouth Strikes Again. You see what he did there? Combined an apropros title with a gay icon singer. Touché, Enzo. But if it was penance you were really after, I think you should’ve locked yourself in a room and listened to The Bronski Beat’s It Ain’t Necessarily So or Liza Minelli singing… anything.

Hack journalism aside, I lay the blame for all this almost entirely at the feet of George Smitherman. I’ll tell you why. Ever since he made his intention of running for mayor clear late last year, Smitherman has pushed personality front and centre. He is the prodigal Toronto son returning ‘home’ to champion the city where he was born and raised although, after spending the last decade at Queen’s Park (which if I have my coordinates right is still located here in the heart of Toronto), George’s journey is not all that epic. His husband, Christopher, is a big mucky muck at Lindt chocolates which makes George’s recent 40 lb. weight loss all the more incredible.

I’ve said it once and I’ll say it again. Who cares?! I just want to know why you want to be mayor, George.

Given the trite, empty clichés George mouthed after he officially filed his nomination papers last week (“A vote for my campaign is a vote for a city that works. I’m going to bring new energy, new direction and new leadership to the challenges that face Toronto.”), maybe personality is all that he possesses. Yeah, yeah, it’s early in the campaign still and it’s a long race, so we shouldn’t expect a full platform roll out, blah, blah, blah. But I think we should have a sense of why it is you want to be mayor as you come out of the gate. And no, this… “My city calls out, my city shows that it has a need to restore a sense of power to the office.”… is not inspirational, George. It’s kind of creepy.

So Enzo and all in your print journalist cohort, dial down the focus on personality. It’s lazy and it makes it easy on lazy politicians with a paucity of positive ideas.